Posted on September 13, 2018 by residentsorganizedforasafeenvironment

Sept 6 visit to the San Onofre Nuclear Waste Dump and why 24/7 Independent Real-time Radiation Monitoring is only the ethical first step we must demand in this process.

On our first visit to the San Onofre Nuclear Waste Dump on June 12, 2018, Darin McClure and I wanted to go out and take a look at the progress of the construction of the ISFSI pad and check radiation levels of the new Holtec JC canisters with our SAFECAST BGEIGIE NANOS radiation monitors. At the March 2018 SCE Community Engagement Panel (CEP) I had introduced the idea of 24/7 Independent Real-time Radiation Monitoring at the San Onofre Nuclear Waste Dump with access to the public. Tom Palmisano, Vice President of Decommissioning San Onofre, gave us permission to take a couple of readings with our new monitors as an example of how they work in relationship to SCE’s monitors. At that first visit, SCE agreed that our monitors were picking up comparable accurate readings with their instruments. After that first visit, I started asking myself if an early warning system was possible. After speaking with three experts in the field I had a pretty good plan for how it could be done, my answer was a resounding yes. On the June 12th visit, the radiation readings ranged from 264 to 324 counts per minute or CPM’s at the two Holtec canisters we measured.

At the August SCE CEP meeting, Tom Palmisano offered a 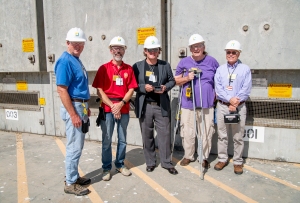 counterproposal for real-time radiation monitoring. That proposal was the SCE monitors on site would go directly to Orange County and San Diego County emergency preparedness operations, but with no public access. I consider this a big win for us. But it is only a good step in the right direction of our negotiations for 24/7 independent real-time radiation monitoring with access to the public. But clearly in my mind and many others who are working for the safety of Southern California residents having access for the public is a must, considering the fact that the Nuclear Regulatory Commission (NRC) has made the San Onofre site a nuclear waste dump for a period of 299 years or until the Department of Energy (DOE) picks it up, and that puts a serious question in everyone’s timeline.

At the August SCE CEP meeting, again I asked Tom Palmisano if he would allow Darin and I to come out and measure all of the canisters on the ISIFI pad and I asked David Victor, chairman of the CEP, to join with us in this effort with his new bgeigie. He said yes. Now I am thinking we have engaged SCE and the CEP and we are working together for the perfection of public safety from the enemy which is radiation and not SCE or CEP. We agreed to meet on-site on September 6th at 2pm. Darin McClure, David Victor, Dan Stetson, Vice Chair of the CEP, and I all showed up on time and ready to go on to the ISFIS pad along with two SCE guides to answer our questions on site.

With our safecast bgeigie nanos in our hands, we all walked up the ramp to the Holtec side of the pad. We systematically walked down the aisles between all 29 Holtec canisters. We got readings from 36 to 649 CPM’s. Remember on our first trip to measure radiation we only measured two canisters. This time we measured each of the canisters on the Holtec side and it’s notable that we got this range of readings. Not too surprised at the higher readings having learned more about what to expect while monitoring on the ISFIS pad. To explain this I now need to explain about time, distance and shielding. These are factors in measuring radiation. The further you get away from the vent pipe the reading starts to go down and that is expected, also, with time, the readings go down because of dispersion; shielding, of course, is how effective the canister is from allowing radiation to escape the canisters. To see all the readings go to http://safecast.org/tilemap/?y=33.37016&x=-117.55535&z=16&l=0&m=0

Now over to the Areva side of the ISFIS pad. These are the older

canisters, some that have been there for as long as 15 years. We started at the oldest canister (number 1) and we moved down the first aisle towards the end and we got the highest reading of the day which was 2024 CPM’s equal to 6.06 microSieverts is the dose rate. To understand the dose rate of 6.06 millisieverts it was explained by Dr. Patrick Patin of SDSU, if I stood next to this canister for 24 hrs a day for 365 days I would receive the legal dose for one year. That is not to say that would be good for anyone. The CPM number is the number of radiation particles that hit our Safecast bgeigie nanos, unfortunately, it is not making a distinction between Alpha, Beta, or Gamma radiation only that there is a radiation source nearby.

As to the highest reading of the Areva canisters, we must consider that these are older canisters with less of an ability to shield the radiation, therefore, we can expect higher readings from these canisters, which SCE said was normal and to be expected. SCE once again confirmed that our monitors were reading accurately.

As you should expect, there has been much discussion about these readings and how to understand them between the four novice users of this technology. We all have been consulting with different experts as well as SCE experts. What this user has found out is how this technology is scientific, but there is still an aspect of art to the interpretation and understanding of the qualifying circumstances and factors to these readings that are just difficult to grasp without much more experience. I can say with full confidence that we’ve all come to the conclusion that having qualified experts come in and take more readings may be the only way to get a justifiable, accurate and independent interpretation of these readings.

How can this be done? The obvious answer is to hire an independent expert, have someone from Safecast come and verify the information. To initiate the first step in this action, on September 7th I called Region 4 of the NRC to speak with the team leader Linda Howell who will be at San Onofre September 10th for the inspection and told her of our various readings on both sides of the ISFIS pad and made an official request that the NRC monitor the ISFIS pad while they are here for the Sept 10-14 inspection. These readings should be part of their report.

I hope to have SCE give their explanation of these readings as part of this article or in a separate article of their own. ROSE has been working hard over the last few months with the Community Engagement Panel and Southern California Edison to ensure more cooperation and transparency with the public that I personally hope will result in better safety around the ethics of having a nuclear waste dump in Southern California. ROSE is working with SCE and independent experts, to understand the way the nuclear industry looks at radiation, how the public looks at radiation and a way for all of us to see the truth of it.

To achieve these goals it is important to have the support of the people of Southern California and the city leaders of our communities and to insist that Southern California Edison install 24/7 Independent Real-time Radiation Monitoring at the New San Onofre Nuclear Waste Dump with free access to the public.

For those interested in finding the best technologies to achieve our goals here are some links you may find interesting. “Lighthouse Detector” can distinguish between many sources of radiation. https://arstechnica.com/science/2018/09/lighthouse-detector-can-distinguish-between-many-sources-of-radiation/
Bicron RSO-5 https://www.uml.edu/Radiation-safety/Using-Rad-Materials/Detectors/Dose-Measurements/Bicron-RSO-5.aspx
Safecast https://blog.safecast.org/

ROSE wants to thank Public Watchdogs and give you a big thank you for your help in obtaining the SAFECAST BGEIGIE NANOS radiation monitors. This effort on your part has been a tremendous help in obtaining transparency and cooperation with Southern California Edison to find out what amounts of radiation is coming out of the Areva and Holtec canisters at the San Onofre Nuclear Dump.

Vision for ROSE Working for the good of the Mother Earth. To provide a safe and clean planet for our children and grandchildren, and the seven generations to come. Working to support Ethically Sound Environmental decisions for the future. We hold the power of our vision in our own hands.
View all posts by residentsorganizedforasafeenvironment →
This entry was posted in Answers & Solutions, NUCLEAR NEWS & INFO and tagged CEP, Decommissioning, NRC, Nuclear Waste, Radiation, SAN CLEMENTE, SAN ONOFRE. Bookmark the permalink.

This site uses Akismet to reduce spam. Learn how your comment data is processed.